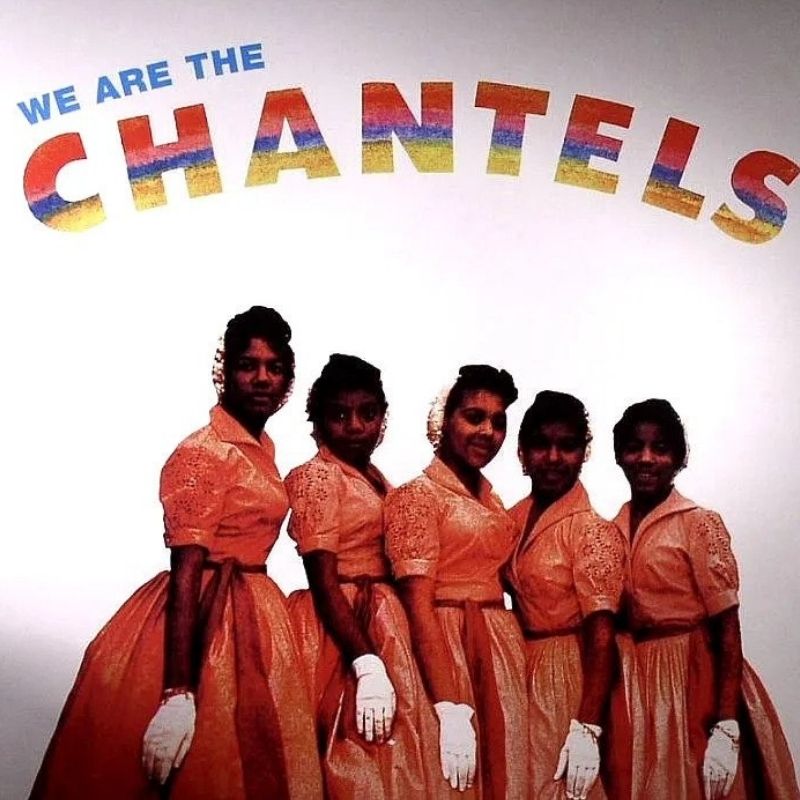 While this album cover may look tame for today’s standards, it was quite controversial when it was released in 1958. African American groups were just breaking into being played on “white” radio, so the image of five black girls on the cover proved to be too much for the music execs to handle.

Thinking white kids wouldn’t be influenced to buy the album, the LP was pulled and replaced with a photo of two white teenagers standing by a jukebox.

The Mamas And The Papas: If You Can Believe Your Eyes and Ears 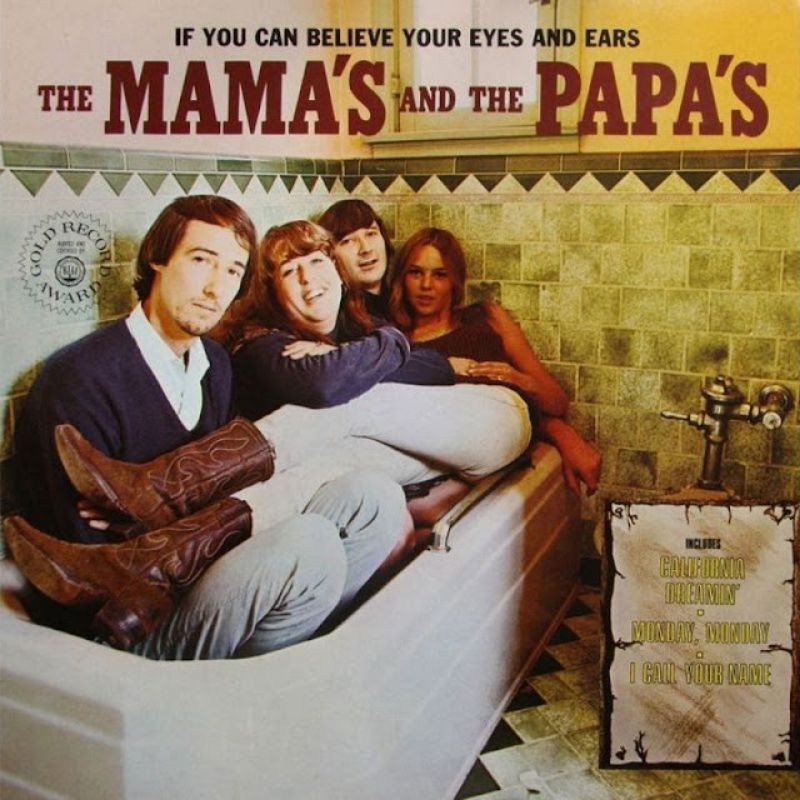 The Mamas and The Papas released their debut record, If You Can Believe Your Eyes And Ears, in 1966. At the time, it was controversial to show the image of a toilet. Retailers were not happy about the cover art, which featured the band piled up in a bathtub that was adjacent to a toilet.

It was considered obscene, and the band released another cover that featured a banner that displayed the names of singles from the album instead. 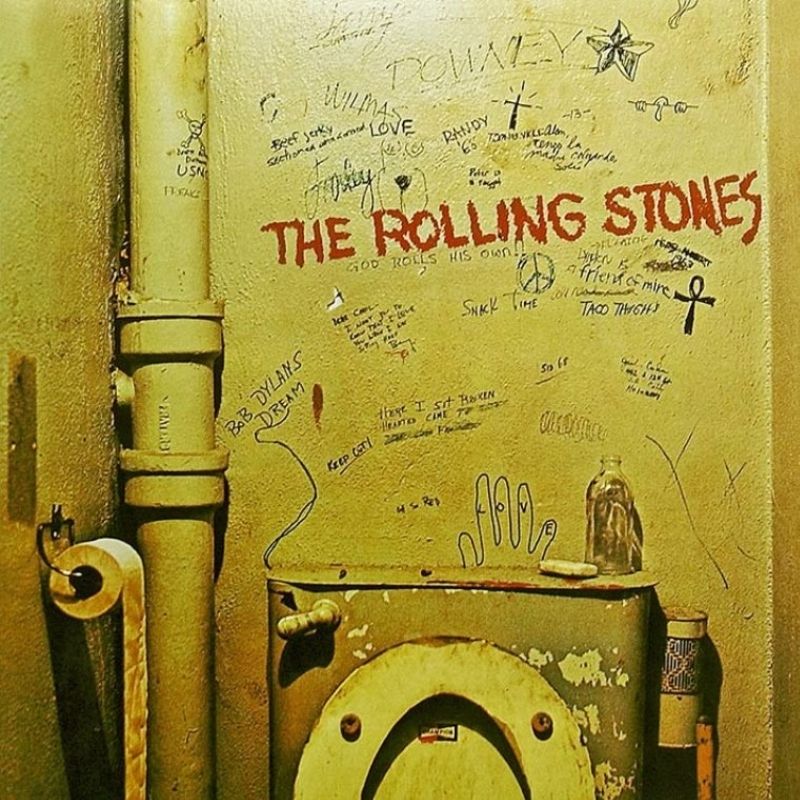 Unfortunately for The Rolling Stones, toilets were still taboo when the cover for their album Beggars Banquet came out in 1966. Their record label pulled a proposed cover photo of a restroom wall covered in graffiti, which had been snapped at a Porsche dealership in Los Angeles.

They opted instead to replace it with a white cover with black print, making it look like a personalized invitation. 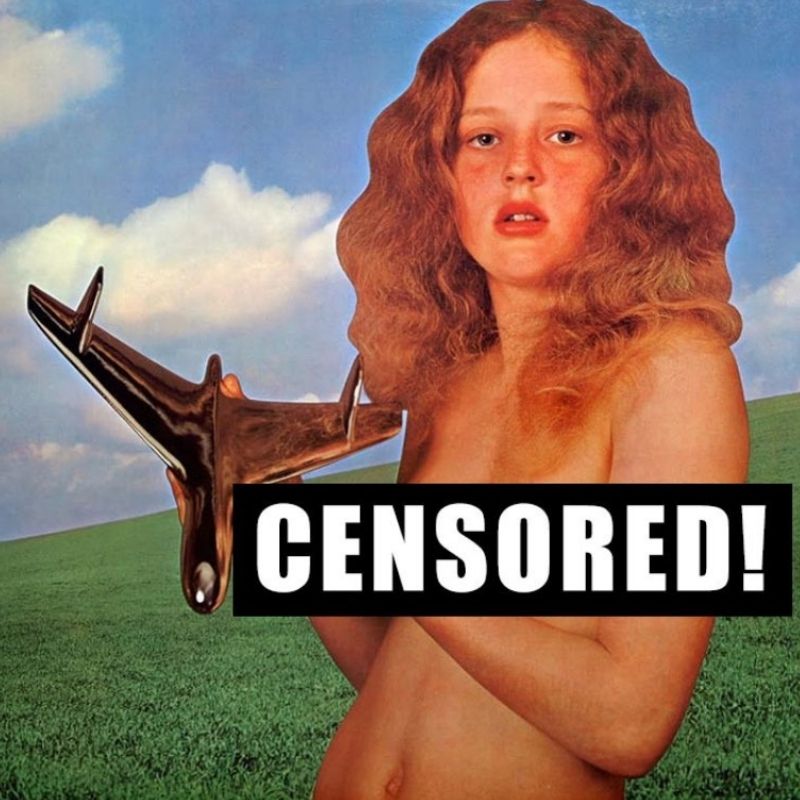 Blind Faith was comprised of Eric Clapton, Ginger Baker, Steve Winwood, and Ric Grech. They released one album in 1969, and the cover art caused quite an uproar. It featured a topless 11-year-old girl holding a replica airplane.

While the image was intended to represent human achievement through technology, it didn’t go over so well with the record execs. The banned photo was replaced by a simple photograph of the band.

The Beatles: Yesterday and Today 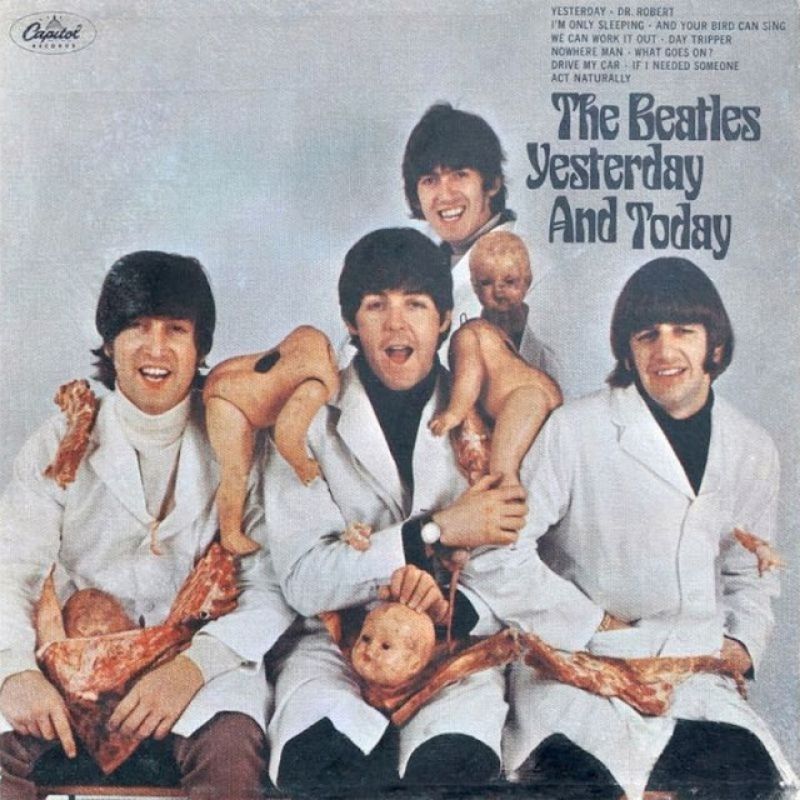 The Beatles disturbed the peace with their cover for the album Yesterday and Today. It featured a photo of the band wearing butcher coats, surrounded by slabs of raw meat and mutilated dolls.

This may seem like no big deal by today’s standards, but it was so controversial in 1966 that the record label pulled the album and replaced it with a cover featuring the band surrounding a trunk.

Alice Cooper: Love It To Death 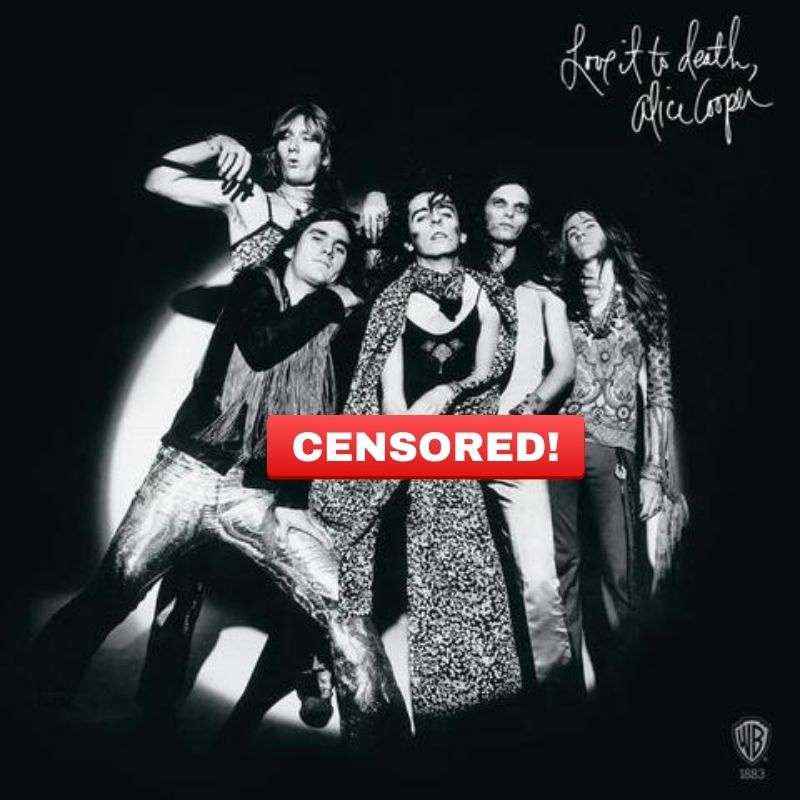 Shock rocker Alice Cooper and his band took a joke a bit too far when they posed for the album cover for their third album, Love It to Death. Cooper performed an obscene gesture when wrapped himself up in a cape, and poked out his right thumb, making it look like he exposed himself.

The record label came up with an easy solution and completely airbrushed his right arm out of the picture. 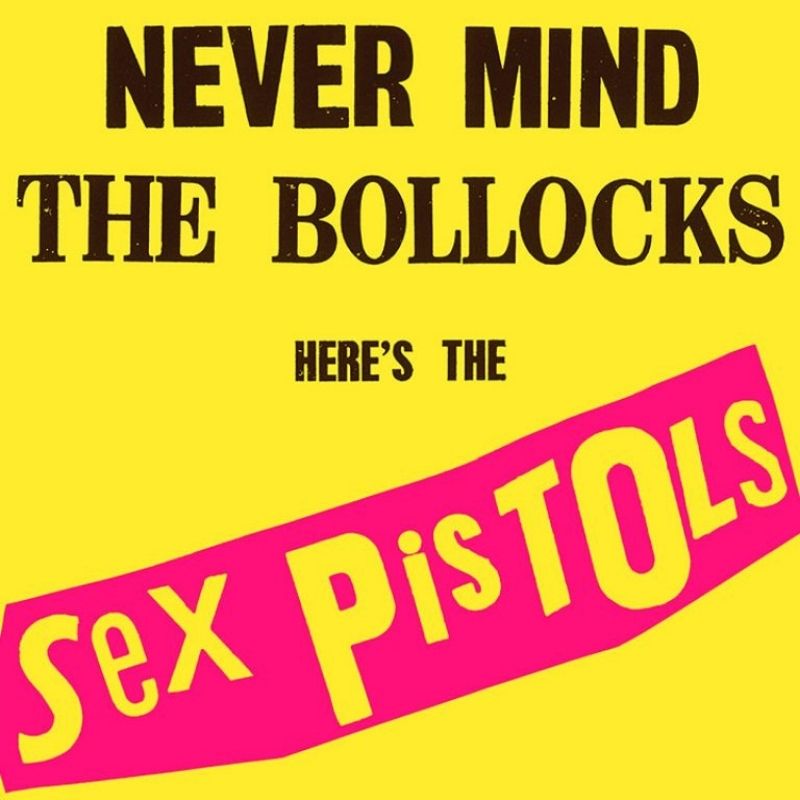 Leave it to the Sex Pistols to really shake things up in the music industry. The band’s cover for their album Never Mind The Bollocks, Here’s The Sex Pistols created all sorts of trouble, including an obscenity case in the UK when a record store put the sleeve in a window display.

What was the offense? The word “bullocks” was considered to be taboo and off-limits in society. My, how times have changed. 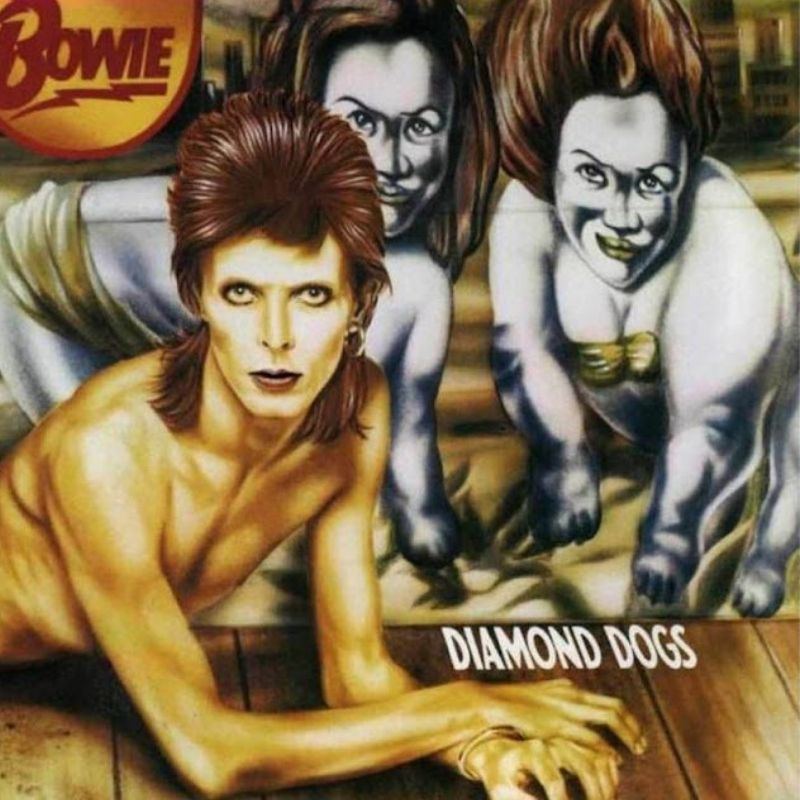 David Bowie kept things weird on the gatefold image for his album Diamond Dogs. When the image was seen in full, it showed Bowie posing with the body of a dog, complete with an exposed male groin. The image was just too shocking for the world to handle, and the offending body parts were eventually airbrushed out. The original artwork appeared years later in the 1990 EMI/Rykodisc CD reissue of the album. 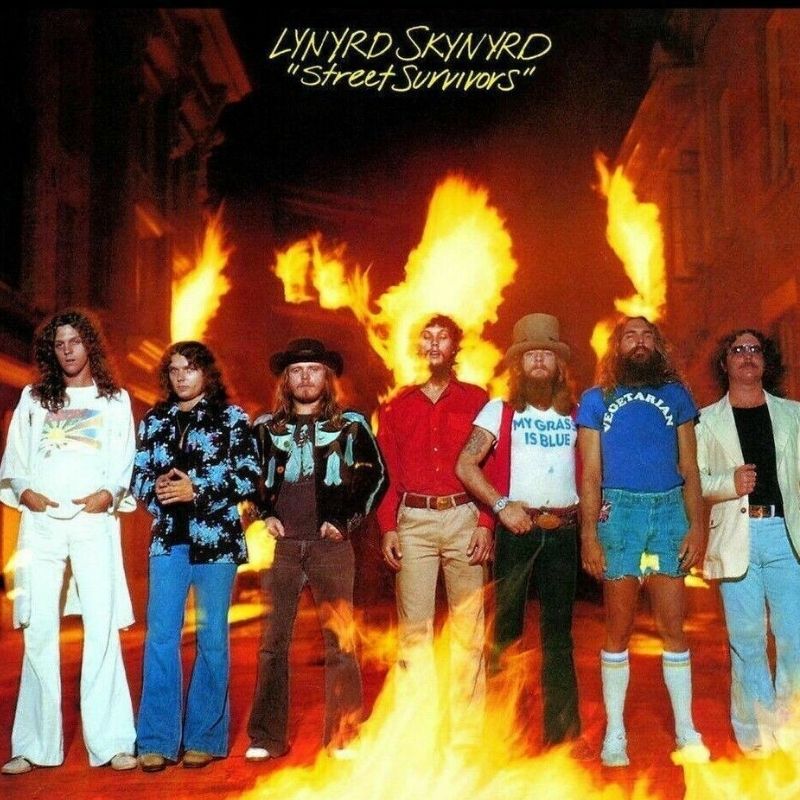 In 1977, tragedy struck when three members of the band Lynyrd Skynyrd passed away in a plane crash, a few days after they released the album Street Survivors. The cover featured the band standing in front of a burning building. The image proved to be in poor taste after the horrific accident, and the photo was replaced by a much more appropriate pic of the band standing before a black backdrop. 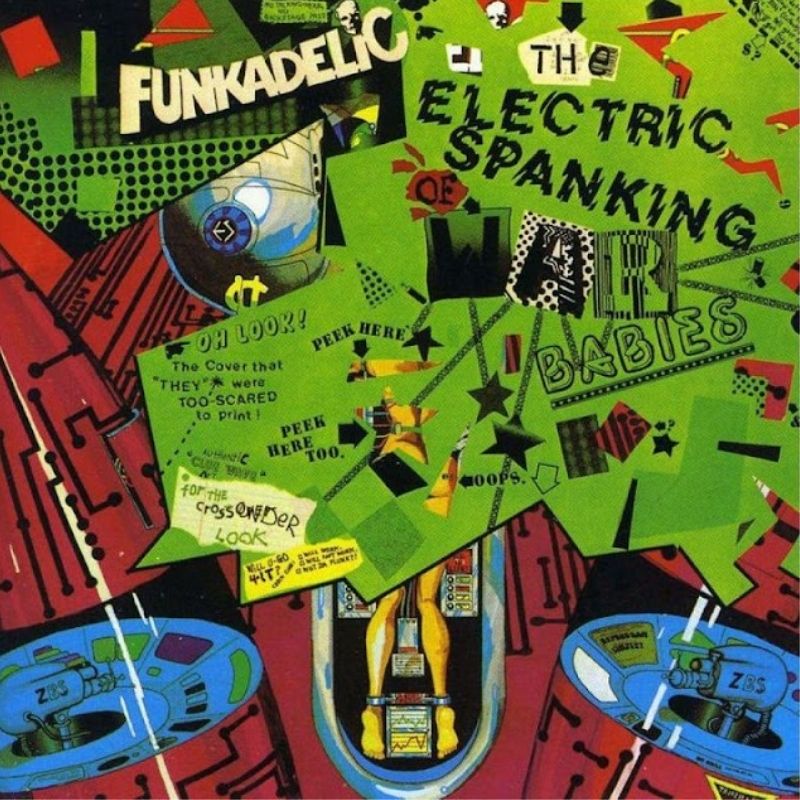 Funkadelic is known for pushing the envelope, so it’s no shock that they landed on this list of controversial album covers. Warner Bros. didn’t feel comfortable with the artwork for their album The Electric Spanking of War Babies. The image featured a nude woman standing inside a very phallic spaceship. The band sent a clear message when they covered the image with a banner that said: “OH LOOK! The cover that ‘THEY’ were TOO SCARED to print!”

Roger Waters: The Pros and Cons of Hitch Hiking 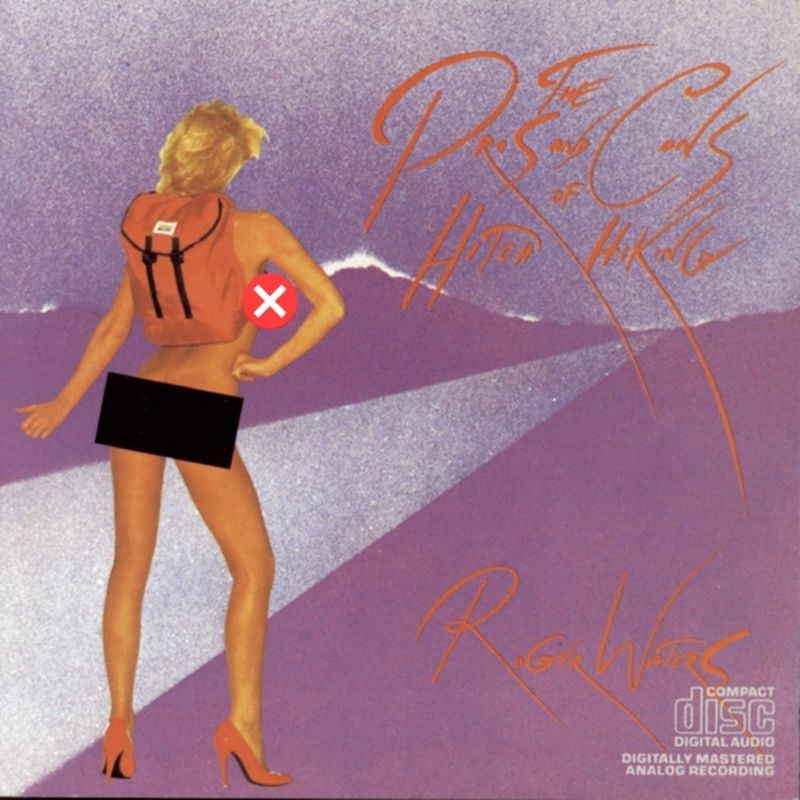 The album cover for Roger Waters’s The Pros and Cons of Hitch Hiking is another example of censorship in its finest form. It featured a photo of model Linzi Drew hitchhiking in nothing but a backpack. The record execs at Columbia Records disapproved of Drew’s naked rear and released future editions with a black box conveniently placed to cover the offending booty. The original was just too hot to handle. 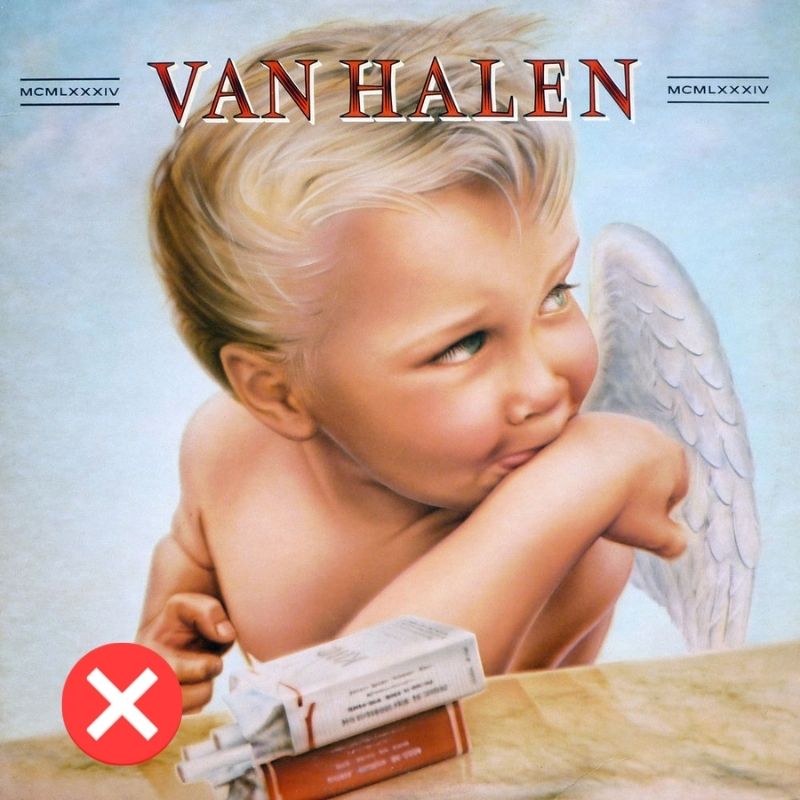 >Van Halen capture the spirit of rebellion in the 1980s and the band stirred the pot with the cover of their album 1984. It featured artwork by graphic designer Margo Nahas. Critics were shocked by the image of a child-like cherub sitting by a pack of cigarettes and holding a smoke. It caused such an uproar in Europe and the UK. Some retailers went so far as to cover the cigarette with a sticker. 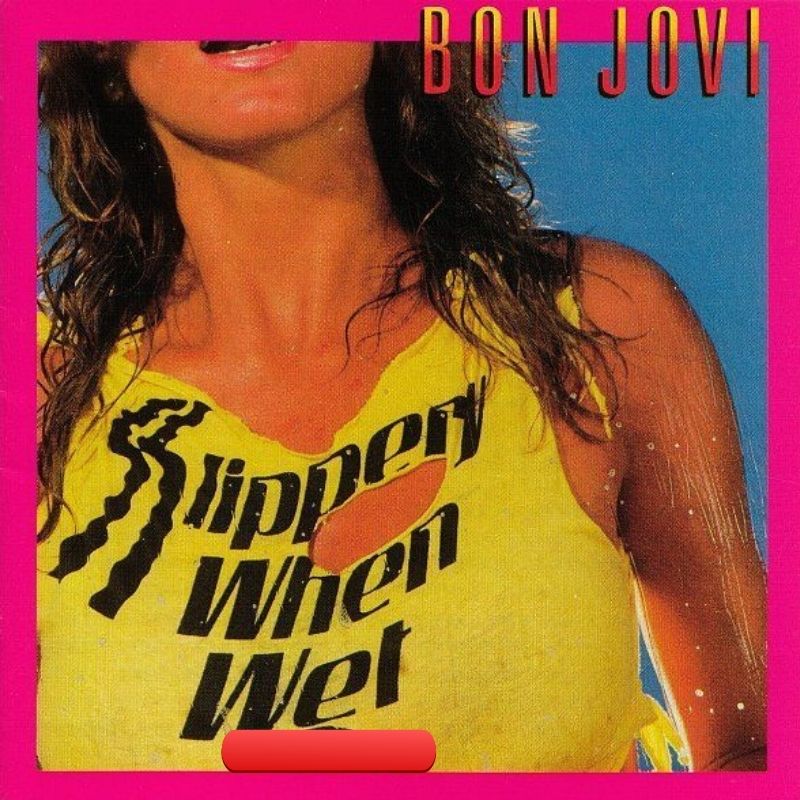 Bon Jovi dominated the charts in 1986 with the album Slippery When Wet. The original album cover, which featured a woman’s chest in a wet t-shirt with the album’s title printed on it, proved to be too steamy for the record company and they were nervous the album would be banned. They had to come up with a new idea and replaced the cover with “Slippery When Wet” written in the rain.

Poison: Open Up and Say…Ahh! 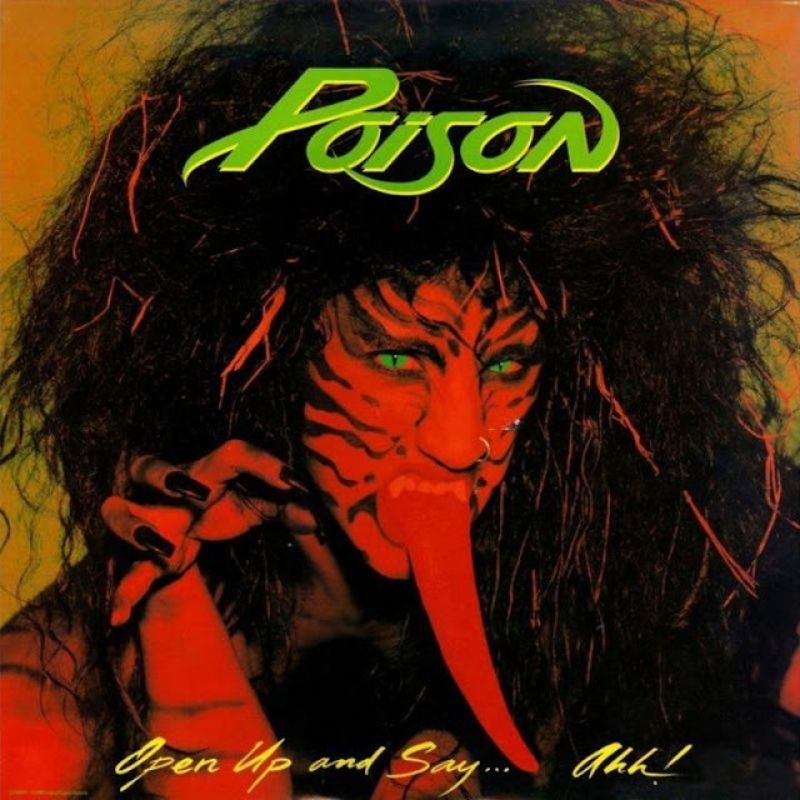 You couldn’t get much hotter than Poison in the late 80s. The original cover art for their album Open Up and Say…Ahh! riled up parental groups, as they claimed the image was demonic. It featured the model Bambi, in full she-devil attire, including glowing eyes and super-long tongue. The band gave in to the demands of the parental groups and changed the cover so that only the model’s eyes were shown. 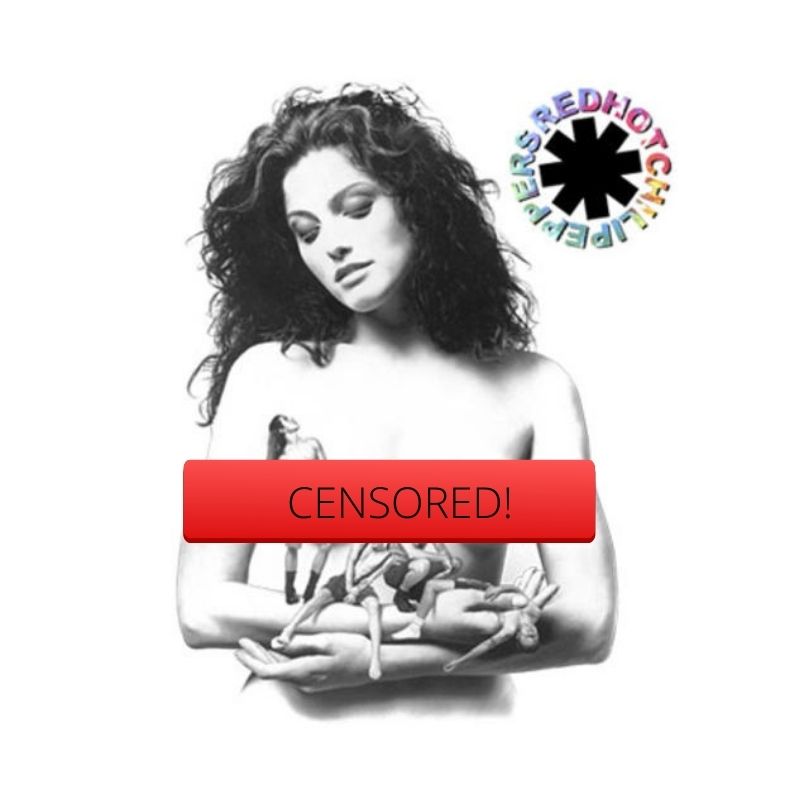 The Red Hot Chili Peppers got a heated reaction to the cover of their album Mother’s Milk. The image caused controversy for two reasons. First, the model featured in the artwork, Dawn Alane, accused the band of not informing her that she was going to be on the cover. Then, several retailers in the US banned the album, which showed the band cradled in the arms of a topless woman. Despite the fact that her naughty bits were covered, store owners were not happy with the nudity. 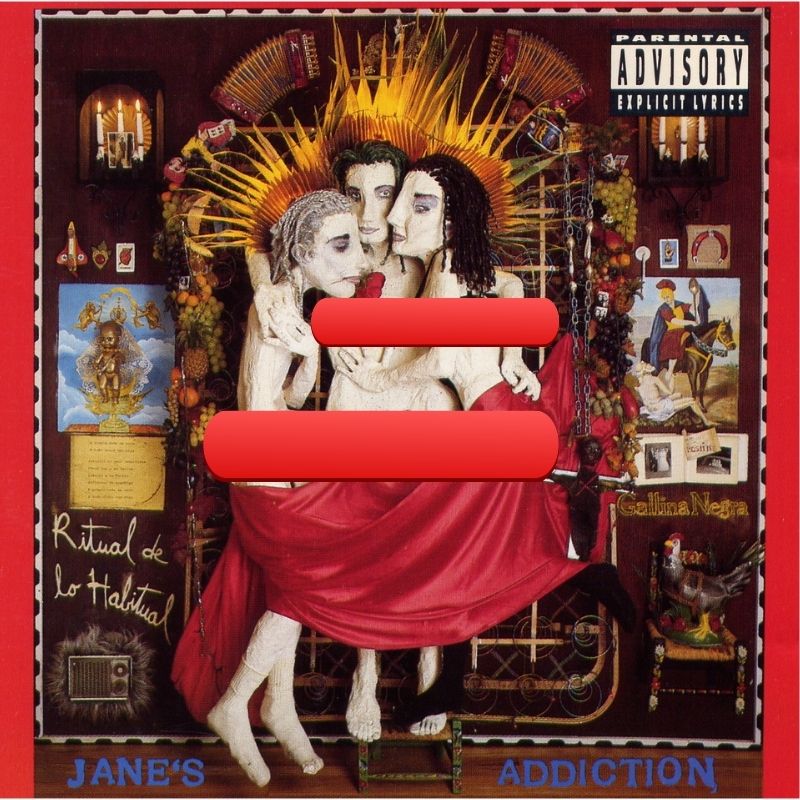 Jane’s Addiction found itself in the middle of controversy for the cover of their album Ritual De Lo Habitual. Lead singer Perry Farrel created the artwork that included female and male nudity and was inspired by their album Three Days. Political action groups pressured the record company to change the cover in the name of indecency, but the band refused to back down. Eventually, an alternative was made for people to purchase who were offended by the nudity. 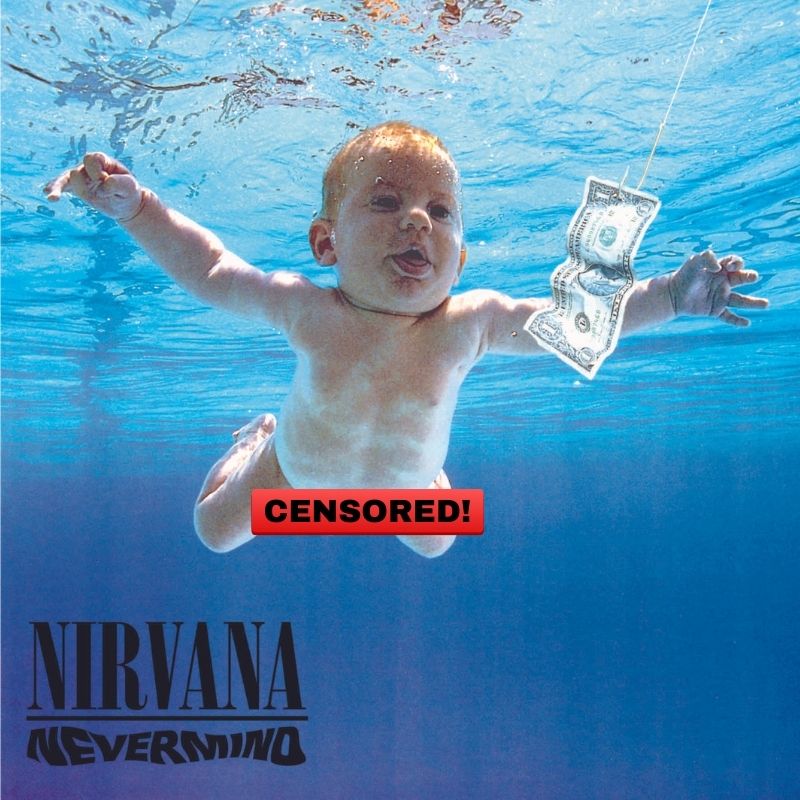 Nirvana’s cover for their 1991 album, Nevermind, is iconic and synonymous with the Grunge generation. The art features a naked baby floating in a swimming pool with a dollar bill floating on a fishhook in front of him. It was supposed to represent the human desire for money. Critics found the cover to be indecent and years later, the baby in the photo sued Nirvana to restore his privacy, but the case was dismissed. 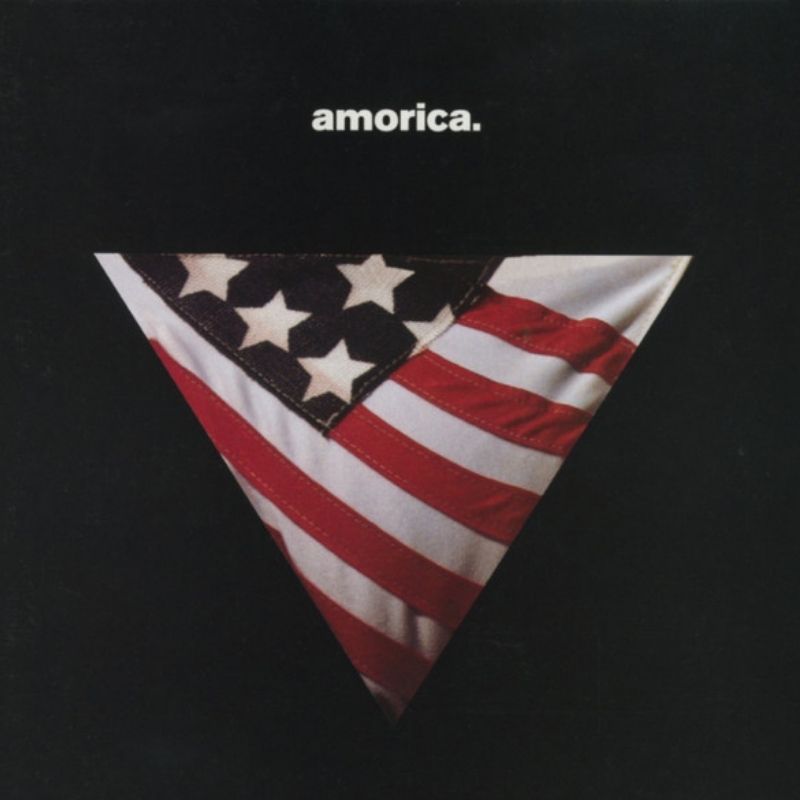 The Black Crowes have a love of 70s style and took their penchant too far with the cover of their album Amorica. It featured the pelvic area of a woman wearing an American flag thong. The pic was taken from a vintage Hustler photo and let’s just say that the model hadn’t waxed in some time. Parental groups protested the cover, and it was reissued with a plain black background. 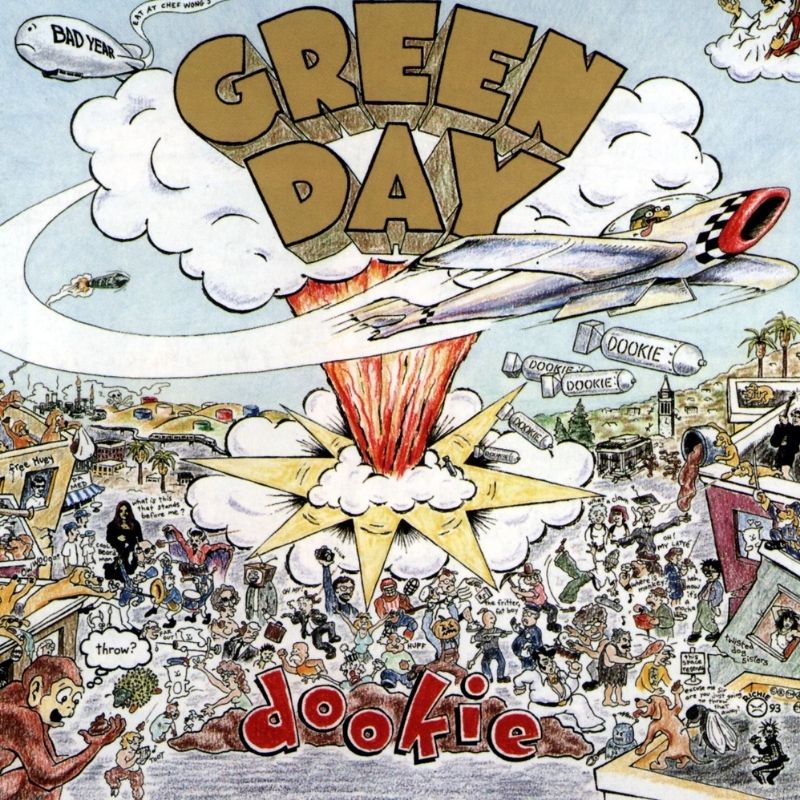 Green Day burst onto the scene with their first album, Dookie. The cover featured a cartoon with an explosion surrounded by all sorts of mayhem. While the image reflected their punk rock spirit, it didn’t go over so well with some retailers who felt like the cartoon was too violent. Despite the outrage, the album went on to be certified Diamond, selling 10,000,000 copies. 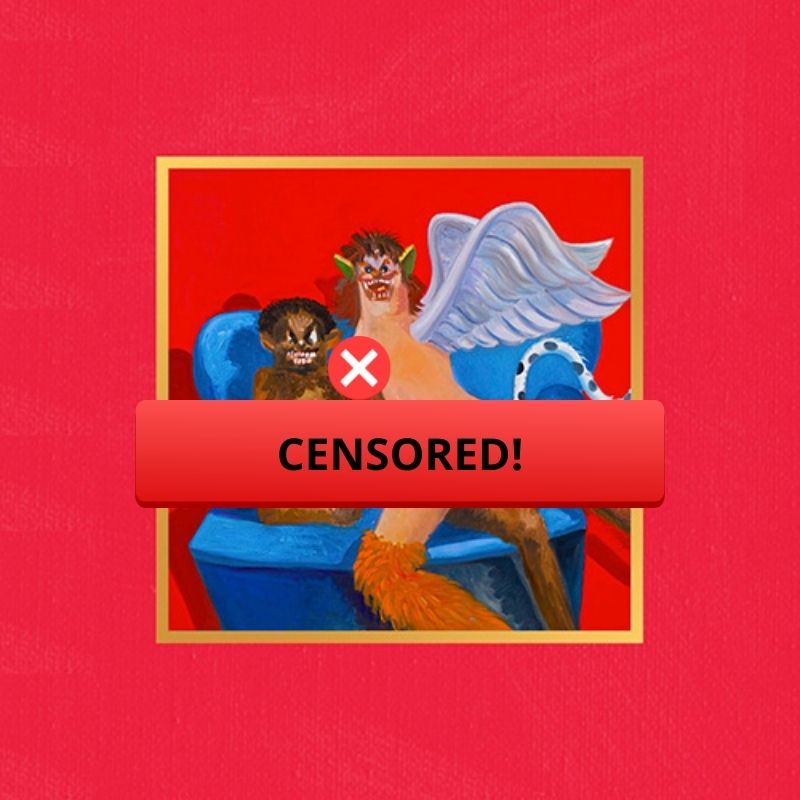 Kanye West is known for pulling publicity stunts and the artwork for his album My Beautiful Dark Twisted Fantasy certainly turned heads. The cover shows West getting busy with an armless angel with a tail. The artist, George Condo, claimed that West requested a provocative image that would be banned. Being no stranger to controversy, his plan worked because the cover got everyone talking.

The post The Most Controversial Album Covers Of All Time appeared first on BetterBe.